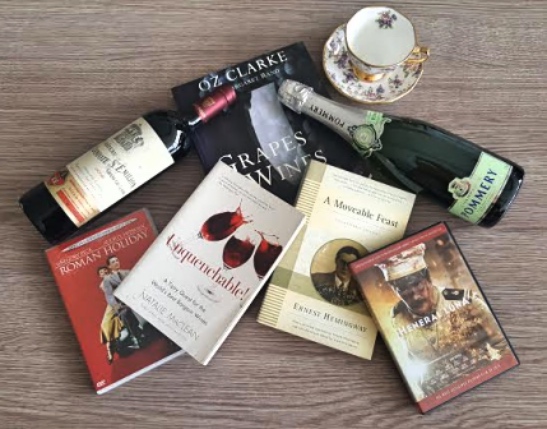 A melange of things that remind me of my heroes

I’ve been MIA for a week now (so much for that target of hammering out an article at least 2x a week, eheh), but as people close to me know, my calendar has just erupted like one of those Dr. Pimple Popper videos… Out of control and messy (I’m sorry for the graphic analogy!).

Think four wine events right before I fly off to Europe for work/research, followed by travel plans once a month until the end of the year.

That being said, I’ve mostly used my laptop for research, RSVPs, email, homework, and admittedly, entertainment.

One of the entertaining things I came across involved people talking about what they’d like to eat and discuss with their heroes (living or dead)… Then, I thought to myself:

What would I drink with my heroes?

“Wine is one of the most civilized things in the world and one of the most natural things of the world that has been brought to the greatest perfection, and it offers a greater range for enjoyment and appreciation than, possibly, any other purely sensory thing.” – Ernest Hemingway

Why: He had one of the wildest lives I’ve ever read about, and I admire his writing style. His time in Paris was so epic; I did an “homage to Hemingway” walk and hung out in his Parisian haunts when I last visited the city. One of my all-time favourite books is “A Moveable Feast”, which chronicles some of his adventures.
What to Drink: Bourbon. The man loved his alcohol… The stronger, the better. While he was known to drown himself in some of the best French wines during his time, I feel like Bourbon is a little more like him: Masculine, rough, and earthy.

“Quand il me prend dans ses bras, il me parle tout bras, je voie la vie en rose (When he takes me in his arms, and speaks to me softly, I see the world in rose-coloured glasses)” – Edith Piaf, La Vie En Rose

Why: Môme Piaf’s agitated, powerful, and heartbreaking voice was a reflection of her tragic life. Whenever I get melancholic and miss Paris, I listen to one of her songs and I’m transported to the beautiful but grimy streets of the city.
What to Drink: Champagne. Oh, the woman could down a bottle like it’s nobody’s business. I also loved that she lived during a time when drinking Champagne out of a coupé was considered très chic.

“When dealing with complex transportation issues, the best thing to do is pull up with a cold beer and let somebody else figure it out.” – Anthony Bourdain, Parts Unknown (Peru)

Why: The man is one of my culinary idols. While I decided not to pursue a career in the kitchen, his irreverent take on haute cuisine (and his colorful vocabulary) has consistently inspired me to be as unconventional and cheekily verbose as I could when dealing with wine. Also, it has to be said that he has fantastic taste in vino.
What to Drink: San Miguel Pale Pilsen (with Sisig!). The man loves the pig, which we Pinoys have perfected in the form of heart-attack inducing dishes, like Bourdain’s Filipino favourite, the sisig. Nothing on earth goes better with sisig than an ice-cold beer. To truly be Pinoy, San Miguel is the ultimate, decent brew to go with our greasy bar chow.

“The most important thing is to enjoy your life – to be happy – it’s all that matters.” – Audrey Hepburn

Why: The woman personified grace, fashion, elegance, and everything a true lady aspires to be. Her iconic films, such as “Roman Holiday” and “Sabrina”, showcase her poise, diction (to this day, I couldn’t believe a chauffer’s daughter or a high-class call girl could speak like that), and Givenchy’s 1960’s creations.
What to Drink: Cognac. A little known fact about Hepburn is that she drank a glass of cognac after dinner every night as a digestif. For me, there’s something incredibly stylish about swirling a shot of cognac in a snifter.

“The question I’m asked most often: ‘What’s your favorite wine?’ My answer: ‘The one someone else pays for.'” – Natalie MacLean, Unquenchable

Why: I’ve always loved her wine writing style, which is humorous, light, and approachable. Wine novices and hardcore winos always appreciate her work (I still use them as reference).
What to Drink: Romanée-Conti 1979. I’d love to share one of my favourite Burgundy vintages over stories of her meeting the Madame Lalou Bize-Leroy.

“There is not the hundredth part of the wine consumed in this kingdom that there ought to be. Our foggy climate wants to help.” – Jane Austen, Northanger Abbey

Why: I think girls who dream of getting swept off their feet (by a man with “10,000 a year”) read an Austen novel at one point in their lives. Her famous works are light, fast-paced, and a guide on marrying well in Regency-era England.
What to Drink: English Breakfast Tea. Honestly, it’s because all three words make me think of Austen… Having tea during a bright, sunny morning in a cottage overlooking fields of wild flowers, gossiping about suitors and marriages. Of course, proper frou-frou teacups are a must!

“The focus on my appearance has really surprised me. I’ve always been a size 14 to 16, I don’t care about clothes, I’d rather spend my money on cigarettes and booze.” – Adele

Why: Plus-sized women need an enormous amount of confidence and talent to be successful… Both of which Adele has. Add to that her unique brand of sass, and we’ve got a heroine everybody could relate to (from heartaches, to moving on, to having her H&M card declined), all packaged with a set of pipes that could make the undead quiver.
What to Drink: Right Bank Bordeaux. I found out from some of her interviews that she likes a glass of wine… Red wines from the right bank of Bordeaux are both powerful and silky, just like Adele’s voice.

“You have to try it. You only have one trip. You’ve got to remember that.” – Iris Apfel

Why: Talk about longevity. This woman is 94 years old and can accessorise outfits like it’s nobody’s business. I’m amazed at the fact that she’s still relevant in the world of fashion and lifestyle after so many decades. She had one of the longest marriages in the public eye, spending 67 years with her husband, Carl Apfel, until he died in 2015.
What to Drink: Manhattan. A proper Manhattan involves Canadian whisky, Angosturra bitters, sweet vermouth, and a maraschino, served in an incredibly chic cocktail glass. Added bonus, the name is a nice way to honour her New York roots.

“The ritual observed by professionals is not just showing off: there is a purpose to every stage, and it can help you to get maximum pleasure from a bottle of wine. Wine can be complex stuff, and if you just knock it back you could be missing out on a wonderful sensory experience. Instead, take a few moments to discover a little about a wine’s background, appreciate its colour, and savour its scents and range of flavours.” – Oz Clarke

Why: He’s irreverent, entertaining, knowledgeable, and has an enviably no-nonsense palate when it comes to wine. I’ve always admired and respected him for his approach on wines and writing… He manages to inject his dry humour while beautifully utilising the English language, without losing essential information that allows winos to truly learn something. One of my favourite wine shows is “Oz and James’ Big Wine Adventure”, and I use his book “Grapes and Wines” often… Confession: One of my life goals is to meet him one day.
What to Drink: Anarchy from Cypher Winery, Paso Robles. I loved learning about how Anarchy truly captured the rebellious nature of these Paso Robles winemakers during an episode with James May… What can I say, I like people (and my wine) out of the box (no pun intended). I especially loved Clarke’s apprehension as he rode on the back of a hog to get to the winery.

Why: Admittedly, my mind wandered off during history class when I was a kid (I honestly blame the deep Tagalog our teachers used to teach the subject), so I never really looked into General Luna’s life story until the film “Heneral Luna” came out. Through the movie, I learned about his passion for the country, disdain for dissension, and stubbornness to inculcate a national pride amongst the Filipinos of the time.
What to Drink: Ribera del Duero Tempranillo. Honestly, because p*ny*t@ it’s good s**t from Spain.

I realise that my eclectic list of “heroes” includes famous people, but anyone can be a hero, including us everyday folk… As long as we’re courageous and noble in our own way.

What would you drink and talk about with your hero? Cheers!

“Here I sit halfway to somewhere, thinking about what’s in front of me and what I left behind” 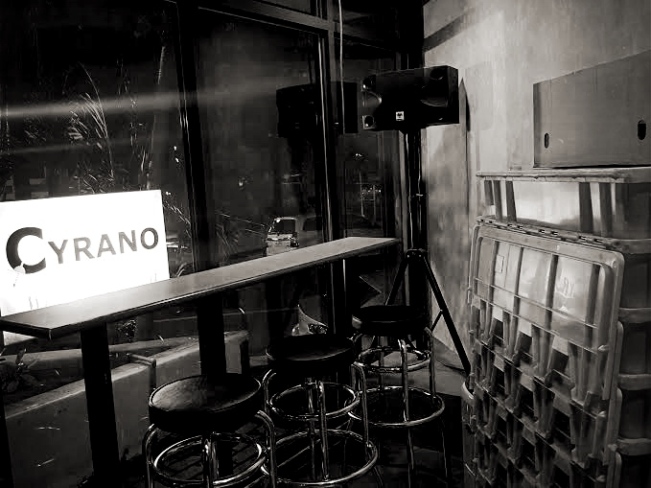 This song, perhaps, sums up the melancholy I felt when we hung out one last time in Cyrano’s old location.

I know I’m breaking one of my old rules by talking about an establishment instead of the drinks, but I think I’ve covered some of Cyrano’s drinks in a previous entry.

It’s just that I realized, as I looked at all the old familiar faces of the bar’s regulars, that no other place has been such a part of my “wine life” than Cyrano.

Just to give readers an idea on how the place is to regulars like myself, think Cheers… Everybody literally knows your name.

I started going to Cyrano in the middle of 2008, when I was working for a wine company. My then landlord and I decided to hang out, and since his office was in Legaspi Village, he took me to Cyrano.

It was then that I met Cyrano’s resident snarky bartender, Alex, who introduced me to the art of wine. See, I knew a little bit about wine before I met Alex, but he was instrumental in changing my perspective. I would have never perceived wine as a lifestyle without him. To this day, I owe coming up with the conclusion that wine involves gastronomy, culture, geography, and science to him.

Since then, Alex has become such a part of our lives; we even got him to attend our wedding (in his Wallace and Grommet tie).

Here are other things I will never forget from the ultimate neighborhood wine bar:

Old regulars marveling at how much our lives have changed made Cyrano’s last night in Legaspi Village particularly sentimental. We realized we don’t hang out until 4am anymore, we don’t drink like fish the way we used to, and we’re in bed by 12 midnight… Totally titos and titas of manila.

To further drive home our age, we decided to play power ballads of the 90s (which is the reason why Mr. Big is stuck in my head). After all, is there a better way to end an era than with lots of food, wine, friends, and belting out songs we grew up to?

Much as we titos and titas will miss the old place, we are also very excited to see it re-open in a different location: Cordova Building along Valero street in Salcedo Village. This should happen in a couple of months, so hey… We are totally looking forward to that. 😉